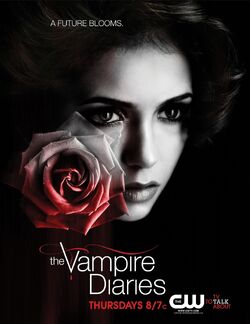 Please keep in mind that this fiction is completely independent from the actual Season 4 of The Vampire Diaries. The story continues the events of The Departed, and ignores everything that's happened after that. Feel free to write comments, discuss, and make criticism, but please be constructive rather than destructive. Inappropriate and offensive comments will be deleted.

The 4th season consists of 22 episodes.

Slogan is Will They Survive This Time.

Season 4 starts right after the events of The Departed. Elena has hard times to adjust her new self, despite Stefan and Damon's huge efforts to help her. Caroline learns that Tyler is still alive, unaware that it's actually Klaus. They eventually decide to leave town, but when new people arrive to town, both will have reasons to stay. Bonnie starts losing herself into dark magic, and her friends start to fear what she is capable of. Finally when a new group of people arrives, the gang will be drawn into a battle that will determine the fate of everyone.

Retrieved from "https://mgc.fandom.com/wiki/Season_Four_(Post_Season_3)?oldid=8119"
Community content is available under CC-BY-SA unless otherwise noted.